skip to main | skip to sidebar

"The Recession Is Over"

It appears that another wave of optimism has hit Wall Street in the early days of earnings season. That's not to say the news has been all good. As my readers know, it is optimistic people that determine which news is important, rather than important news making people happy. There is plenty of bad news out there. Intel's earnings release was riddled with weaker sales to key customer groups, Dell disappointed likewise. Retail sales were dismal if you don't include government incentives for auto purchases and rising gas prices. Unemployment numbers continue to worsen. Hundreds of thousands of people in California are getting their only income in the form of an IOU that banks are refusing to cash. Small business lenders are going bankrupt.

My baseline expectation was for a deeper selloff this summer toward the 780 level on the S&P, followed by a strong spike to marginal new highs around 1000-1075 before falling off a cliff in the last months of the year and into 2010. But this week's early rally higher needs to be considered something other than a simple oversold bounce - especially if it holds today into the close. It will be telling us that optimism is still in control and higher prices can be expected immediately. However, that may not be a good thing for the overall market as the summer wears on. Without that large and protracted selloff, there will not be enough overbought conditions worked off and the market will be ripe for total exhaustion as we enter autumn.

Contingent to today's extension higher holding into the close, I am changing my top expectation from the first chart to the second chart for the remainder of '09. Of course, either or neither of these scenarios could play out. 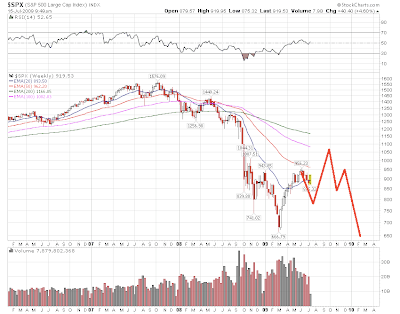 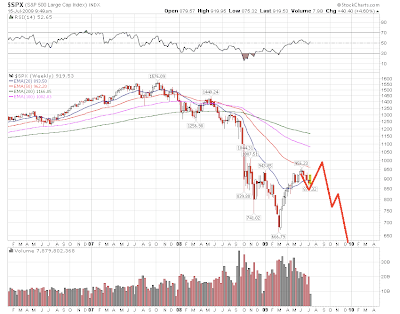 Either way, the function of this entire rally from March until whenever it exhausts itself is to convince as many people as possible that the worst is over. By the end it should be "common knowledge" that the recession is behind us. We should see many prominent figures claiming the same "without question." Very similar to the sentiment that was prominent into the summer of 1930.

July 8, 1930: Winthrop, Mitchell believes market is in much better condition after recent liquidation, believes stocks "getting near rock bottom levels", would buy many major stocks on further selling. They may go a little lower, but not worth trying to pick a bottom: "The long pull prospect of large profits is too good to be concerned about 5 or 10 point dips, which later will be regarded as only minor setbacks in a major upturn."

July 7, 1930: Finch, Wilson, & Co.: “We believe that many stocks are now selling far below their real value and that purchases can now be made with a minimum of risk and a maximum of confidence of higher prices later.”

July 1, 1930: Labor Secretary Davis says business is definitely turning up in the East, predicts reasonable prosperity within the next year. “People have learned once again that only work produces wealth.”

June 30, 1930: P.E. Crowley, pres. NY Central railroad: “I cannot believe that this country of ours, with its great and resourceful population ... can long remain in a state of depression, business or otherwise. I believe ... that we have turned the corner; that we will slowly but surely go forward to at least as great prosperity as has ever before been attained.”

There was some sanity however:

July 4, 1930: H.H. Allen, economist, says history indicates we're in for two or more decades of price decline. Calls on business to adjust. Says that declining commodity prices don't inevitably cause depression, and normal profits are as possible in periods of declining prices as in rising.

This morning from CNBC: 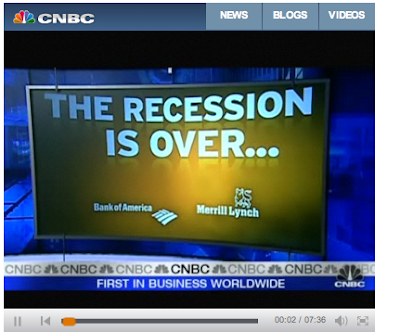 And let us not forget a few years ago: 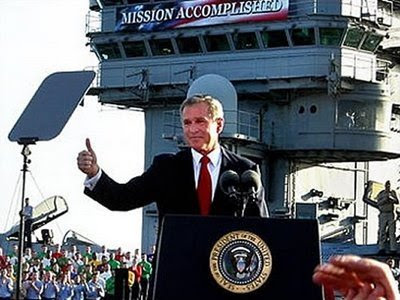 Disclaimer: The content on this site is provided as general information only and should not be taken as investment advice. All site content, including advertisements, shall not be construed as a recommendation to buy or sell any security or financial instrument, or to participate in any particular trading or investment strategy. The ideas expressed on this site are solely the opinions of the author(s) and do not necessarily represent the opinions of sponsors or firms affiliated with the author(s). The author may or may not have a position in any company or advertiser referenced above. Any action that you take as a result of information, analysis, or advertisement on this site is ultimately your responsibility. Consult your investment adviser before making any investment decisions.
Posted by Matt Stiles at 6:41 AM

Matt, how low do you think the S&P going to go?

How are your general views on commodities? There are many conflicting signals. Oil, for example, is facing terrible oversupply & underdemand problems. Yet, on the other side of the equation... there are those Chinese speculative buyings (and most likely hedge funds, too).

It's held up pretty strong, given those horrific fundamentals. As for agricultural, I'm not following.

If we look back to GD 29 history, commodities held up strong during those times. So, is it likely the case again for this epic bear market?

It will depend on how the economy is working 2 and 3 years out. It "could" stop at 450 or so. Then again, if governments and central banks try to do what they did in the GD, then we will see much lower figures - like we did in the GD. Unless debt is liquidated or productivity massively increases, all we will be doing is adding to our problems.

Take a look at the CRB index over the last year. It has been, by far, the worst performer of all the asset classes - even including oil's doubling, etc. I'm bearish commodities until we have a good enough reason to use them. Whether that is via an economic recovery or something MUCH less desirable. ie. war.

Perhaps this is the situation : the Recession is over for most of the world but it is just beginning for the USA (and other 'print money' economies like England, Austria, etc)?

Last I checked the average age of the world was about 25 years of age. These are mostly people in poorer countries and they need a lot of stuff. Many of these countries have the commodities necessary to keep their economies properly collateralized. (The Russia/Brazil currency deal, etc). Global corporations are quite comfortable doing business with nice people and nasty people. No problem there.

In the USA it is the opposite case.

Half the population has enough stuff in their attics and basements to keep going for a couple of years before they *need* to buy anything. Half the people have tremendous unused capacity (example - lawns that could quickly be converted to growing food, oversized homes with room for more people, millions of empty completed buildings, two cars, schools unused for 30% of the year, unused industrial capacity, etc).

Not to mention the private, corporate and government debt that eats any chance of a recovery until it is paid down.

So, the US economy is slowly sinking into the legendary 'poor trap'. It takes money to find a job (a phone, a fixed address, often a car or bus pass, an education, the cash needed to move to another town, etc). The way things are going right now I would suggest that about 100 million Americans are already in the poor trap and another 100 million working Americans (living from one paycheck to the next) are about to fall under that minimum threshold. (Google on Richard Benson Hard Times Financial Sense).

Add the elderly and children and you have an entire economy where people are too poor to 'get a job you bum'. No local demand and no chance of moving.

And no tax revenues to pay for services.

To my mind, this 'poor trap problem' is what most economic analysts are missing.

Falling into the poor trap is like slipping your nose 1 inch under water. It's not a little bit further down. It's a quantum jump down that is very hard to recover from. If I wanted to be harsh, I would say that the big banks - with debt - are repeatedly economically waterboarding the entire working population of the USA.

Anyway, let's hope that Obama's team can come up with something amazing soon! This is beginning to feel like one of those desperate situations where a little kid walks into the White House and drops a comment that (finally) shakes all those brilliant-but-inbred brain cells loose at the same time - yielding the most amazing economic turnaround in history.

I believe that the powers that be are slowly coming around, or perhaps they will be able to generalize from the circumstances presented by California. If they do not learn from California I expect we may see the bad (or should I say the really bad) scenario.

On the other hand maybe I am too optimistic.

Dennis sure has a lot of FAITH in his broker at any rate.

I agree with you if you look at the CRB chart of the past year. However, if you look at longer-term chart (30 yr+) of the CRB, it is so far bouncing off nicely of the previous highs made in 1996 and early 1980s (@ low 300s -> successful retests & confirmation of secular bull market?)

The up-move was violent from late 2005 until early 2008. And so was the plunge. But due to this successful retest (at least for now), shouldn't we consider the plunge more like the 1987 crash (i.e. a blip, followed by continuation of the great bull market)?

I know fundamentally, there are now so many confusing variables adding to the complexity: hedge fund speculations, China artificial expansions, etc. For example, pension funds at the time was not allowed to allocate funds in commodities, but now they are.

I just read (via Some Assembly Required) an op-ed by Paul Krugman June 12th called 'Boiling the Frog'.

I find it interesting that he talks about the slow crash nature of the economic crisis in the USA but (again) there is no mention of the fact that slipping into the poor trap is a major shift, not just a small difference in income or employment opportunity.

BTW: a share in a commodity indexed fund (with a basket of commodities - where they own the rights to take physical ownership of the commodities) is a wonderful de facto global currency. No need for the IMF, the World Bank or anybody else to create some magic currency. Writing up a deal using shares instead of currencies will do just fine and provide a perfect hedge against fiat 'print till you drop' economies.

Which may explain China (oh yes, all of our assets are in USD - especially our shares in commodity indexed funds - grin). The convenience of the shares for large global deals may also take large deals right out of the taxation loop.